A while back I was hired to make some pictures of the local courthouses throughout Acadiana.  I had gotten all the images except for the St. Martin Parish courthouse in St. Martinville, Louisiana which was being repaired.  Early one morning I went to see if the courthouse repairs had been finished but it was still not complete.  Well, since I was still wanting to take some pictures I headed out toward Lake Fausse Point.  I turned on a state highway and noticed in a grove of live oak trees what looked at first glance to be an owl.  So I turned around and parked right near the trees and spotted a Great Horned Owl.  I had never seen such a large owl it was beautiful.  So I'm shooting as the Great Horned owl swoops down into the tall wet grass to capture what appeared to be large insects.  Later I spotted a squirrel so I thought great, I'm going to get the best shot ever the owl swooping in to capture the squirrel!  Well before I know it  the squirrel is right next to the owl and they look like best friends. I was disappointed that I didn't get the shot I wanted but it did make me smile you just never know what to expect from nature.

I hope you enjoy the images! 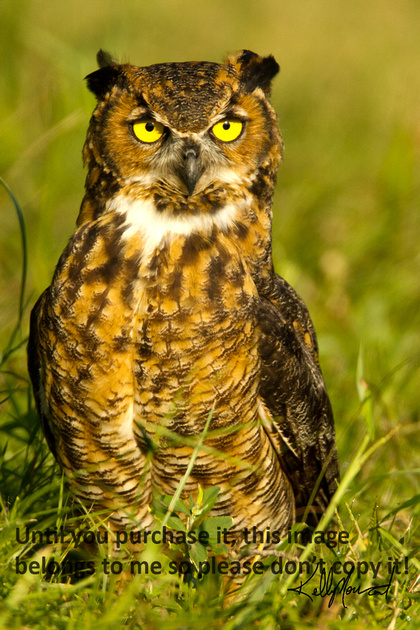