Lake Martin for the Love of a Place. 10 Years Later.

Lake Martin for the Love of a Place.
10 Years Later

I don't have a boat.  I enjoy the lake even without a boat.  I need to get a boat.
Sights, sounds and feelings from the lake.  It's truly sensory overload if we just stop and feel it.......soak it all in. Descriptions just don't do it justice you need to be there absorbing it all.

Why would you go to the same place for ten years?  It's impossible to explain in words, especially but equally a challenge to describe in pictures even if the pictures move.

It was foggy, very foggy on the first day. I truly didn't know which way to turn. Large Great Egrets were right near the road swooping in to work on their nest. The sounds of wings swooshing through the very still air. Little did I know that this was in some ways the beginning of the end. It was 2004 and I thought the birds were in need of an air traffic controller there were many, so many, in such a small area. For a long time that year I never made it to other parts of the lake. I came to this one spot where the birds were and I didn't go any farther. Later, in early 2006, many of the birds left and the birds that stayed moved further from the road.  As of this writing they have not come back in such great numbers as in the past.

People come from all over the world to the lake for various reasons, to fish, to take a swamp tour on a boat, take pictures, see alligators, and just to enjoy the outdoors. I went to take pictures of the birds. My wife's friend, I don't even remember her name now, came to our house and said she had just gotten a new camera and asked me about a good place to take pictures so I suggested Lake Martin. As I was saying the words Lake Martin I thought perhaps I should take my own advice.  So I went on February 28th 2004 and just kept going.

I hope you don't mind rambling because I'm a bit of a rambler....

It's my sincere hope that maybe these pictures will move you.

As I look over the pictures a flood of memories come to me. Early mornings shooting out of the window of my car. Great friends, new and lost. My wonderful friend Charlie Hohorst Jr. whom I met again at Lake Martin. I had known him a little from his retail store back in the 80's. Now I would see him at the lake on a regular basis. Charlie was always willing to share his photography knowledge he was an excellent nature photographer especially birds in flight. I miss him......he died from cancer in 2012.

Once the lake was frozen in a few areas and the Great Egrets were trying to land like it was water and they did splits on the ice. It was quite humorous to watch for a bird nerd like me. One day there was a White Pelican taking part in a Cormorant fish herding party getting his share of the fish. As I was standing there taking pictures a guy walked up to me and said he had lived near the lake for ten years and had never seen a Pelican in the there before and I haven't seen one since.

Thank you for reading.

Kelly Morvant Photography
Pictures for your website or your wall give me a call.
337.962.5432
[email protected]
www.KellyMorvant.com 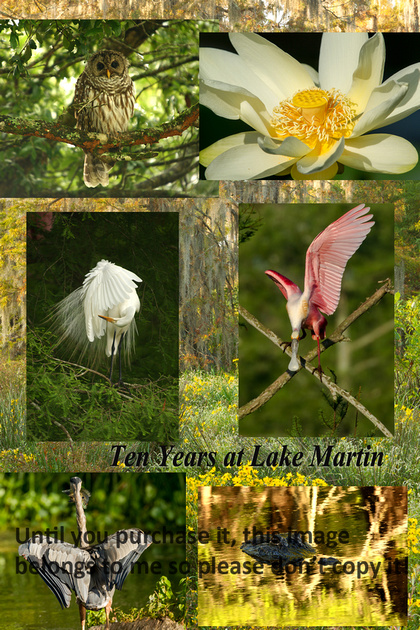